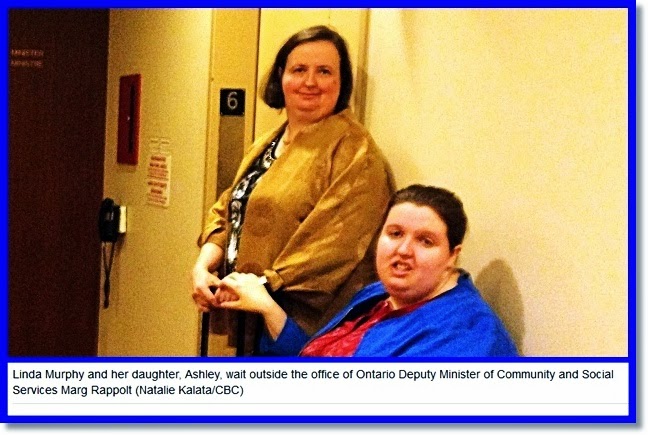 The picture above, as well as the italicized text below are from the CBC article Mother threatens to leave disabled daughter at minister's office. In essence the mother Linda Murphy desperate for a home for her developmentally delayed daughter Ashley threatened to leave her at the office of the Ontatrio Deputy Minister of Community and Social Services.  The CBC web page has the full story including some of the political discussion around the issue of adult care services for persons with special care needs.

Any action by a parent to find a home for their adult autistic or developmentally delayed children is often met with strong criticism from people who don't know the families involved or the challenges they face. In this case I know this family from when they lived here in Fredericton beffore moving to Ontario.  Linda's daughter Ashley used to swim here in the Nashwaaksis Middle School the same pool, on occasion  at the same time, as the pool my son Conor loves to swim in.  Linda Murphy is an excellent mother.  I say that as someone who knows this family and I say that as someone who faces similar challenges in the years to come.

An Ontario mother desperate to find permanent care for her developmentally disabled daughter, threatened to leave the 20-year-old at the office of Ontario Deputy Minister of Community and Social Services Marg Rappolt.  Linda Murphy of Arnprior, Ont., a small community outside Ottawa, arrived at the office Tuesday morning to drop off her daughter Ashley and then return home. The office, however, is closed as Rappolt is currently on vacation.The former minister, Linda Jeffrey, stepped down to run for mayor of Brampton, Ont., earlier this year.

Murphy arrived at the office Tuesday morning, and went to the 6th floor with a change of clothes for her daughter and a care plan. Her daughter just graduated high school, but is said to have the mental capacity of a two-year-old.  Murphy vowed to leave her there. Murphy has been trying for years to get Ashley into a group home. She was asked to wait outside Rappolt's office, then four Ontario Provincial Police officers arrived to tell her they weren't allowed to be there. Murphy was then ushered into a boardroom where she met with senior staff. She said after years of trying she finally got what she wanted: her daughter placed in a home. She said she had been told as recently as last week that was not possible. .... A space for Ashley has been found at an Ottawa area group home. Murphy said she's disappointed it took drastic action, but is grateful to finally have her daughter in a home.

This is the reality of adult services. If one thinks it's difficult to access housing for those with intellectual disabilities, try finding something for someone with complex care needs! We wait for people to die to get into those. How horrific is that? Bless, Linda but, I guess what frustrates me is that she put up a fuss and got something...what about the rest of us? Now that she is silenced, will they sweep all the rest of us under a rug...again??

Probably. Also, who did she bump?? Who waited, did everything right and now has to wait once more??

I realize the system sucks.... but we all have to wait our turn at it.

Boggles that we can put senior adults into residences with full facilities and activities but we have to jam the disabled into homes, let them wander the streets if they can, without activities... and not create enough spaces for them to start with.

But... yanno those baby boomers need it more...

More and more I have this feeling that the day I decide to move into care myself, I will be taking my youngest with me.

The disturbing part, to me, is that this mother has been reduced to such desperation that she has to threaten to leave her child in the hands of ANY unqualified stranger willing to help. This is not only an injustice to the child but has forced the mother who, no doubt, loves her daughter into doing something she wouldn't consider if her situation wasn't so dire. This leaves no one with any dignity. And, as usual, we sit around like a pack of abused dogs waiting for someone to throw us OUR bone.


The problem is, the system was not built on belief that all human life deserves dignity- it was built to shut up all the people who have the audacity to need help. This lack of respect, naturally, only continues in care since nobody dares to complain about substandard care when there are huge wait lists just to get in. This is OUR children who are being treated like crap because the alternative of 'nowhere to go' is worse.

Claire, you are right, the rest of us will be swept under the rug. Farm wife... never mind, your lack of compassion for others seems unreachable. None of this is going to get any better unless we, as a community, start seeing everyone's child as being our own. It's much harder to run from the problem when there's 50 000 families standing in your office instead of just one.

I am a legit high funct autistic that was denied housing ie group home by my states developmental disabilities department and now i live in a run down flat in LA. Any excuses the goverment Will make even if the person has medical issue like me ir severe disabled like.person in article. My advice is to sue.

Thank goodness they found a spot for Ashley! I cannot believe something like this can happen, it is heartbreaking and horrifying!

Good for Linda for her determination, love and bravery! Bravo!