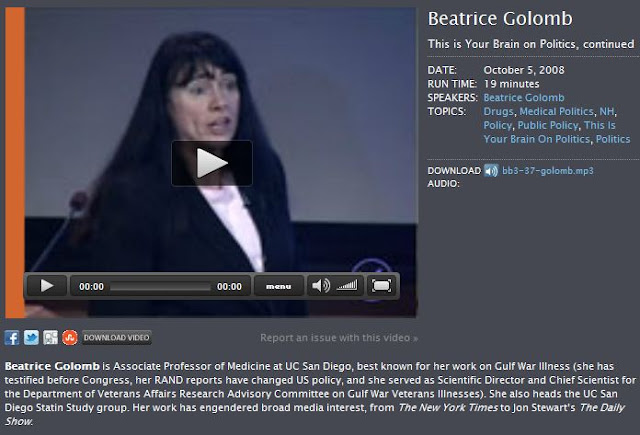 Dr. Beatrice Golomb's presentation This Is Your Brain On Politics pulls no punches in its critique of conflicts of interest, bias, censorship and intimidation involving pharmaceutical companies, health authorities and academic institutions and publications.  Professor Golomb's presentation includes commentary on pressure tactics, including intimidation, used by some pharmaceutical industry representatives to silence criticism of their products and the research that accompanies them.
Professor Golomb's presentation provides an interesting framework with which to consider the continued pressures exerted on Dr. Andrew Wakefield over an article he wrote in 1998 for which, in 2011, he was denounced, by journalistic decree,  as being guilty of fraud.  A refutation of the Wakefield fraud allegations by research microbiologist David Lewis was published in the BMJ  but has not received the major US or world media attention that the original fraud allegations attracted.
An even more recent  demonstration of pressure on those who question or study issues pertaining to vaccine safety has arisen in response to an article on vaccine adjuvants published by two UBC Ph.D.'s.  In Tom Sandborn's article in the Vancouver Courier Responses to UBC vaccine paper a problem for free scientific inquiry and expression UBC researchers raise questions, experience backlash Sandborn describes what appears to be an effort to suppress publication of peer reviewed journal articles which raise potential vaccine health issues. None other than Dr. Paul Offit is reported to have weighed in with comments which appear to suggest that studies or articles criticizing vaccine safety in any way should not be published:

"Shaw, who is on faculty at UBC with the Departments of Ophthalmology and Visual Sciences and Experimental Medicine and the Graduate Program in Neuroscience, and his colleague Lucija Tomljenovic have recently published a carefully parsed and thoroughly peer reviewed paper on vaccine safety, without a doubt one of the most controversial topics in medicine today. Despite the cautious and professional tone of the paper, and despite the authors' clear statement that their findings are not in themselves decisive, only pointing to the need for more extensive research into vaccine safety, the paper, published in November 2011 in the Journal of Inorganic Biochemistry which describes correlations and possible causal links between increased exposure to aluminum salts used as adjuvants in vaccines and increased levels of neurological trouble in exposed populations, seems to inflame angry and punitive responses in some quarters.


For example, when I discussed the Tomljenovic/Shaw paper with Dr. Paul Offit, a professor at the University of Pennsylvania, a strong proponent of vaccines and the developer of a successful new vaccine that has made him a multi-millionaire, he told me that the paper "should never have been published," despite the fact it was rigorously peer reviewed before publication. (Like many who want to insist that all questions of vaccine safety have been settled, Offit invokes the notorious Andrew Wakefield affair involving a now discredited and withdrawn paper published in The Lancet in 1998, which suggested a link between MMR vaccines and autism. Offit claims that paper is responsible for avoidable deaths as worried parents failed to vaccinate their children. Wakefield has recently filed a suit for defamation against Brian Deer, the investigative journalist whose work was central to the storm of criticism that surrounded the Lancet paper.)"

In the context of the autism vaccine war the late Dr. Bernadine Healy expressed confidence in the general safety of vaccines while talking about the need to explore possible vaccine impacts on susceptible populations. She also expressed confidence in public understanding of the value and importance of vaccines in protecting and promoting pubic health and safety while cautioning public health authorities against dismissing further scientific research on autism vaccine issues:

"There is a completely expressed concern that they don't want to pursue a hypothesis because that hypothesis could be damaging to the public health community at large by scaring people. First of all, I think the public's smarter than that. The public values vaccines. But more importantly, I don't think you should ever turn your back on any scientific hypothesis because you're afraid of what it might show."

The concerns expressed by Dr. Healy about the suppression of scientific inquiry into vaccine autism issues by public health authorities appear to be supported by the attempts to suppress the publication of articles like that of the UBC professors published after rigorous peer review which pointed to possible issues with aluminum salt adjuvants in vaccines.  Dr. Offit, and others who wish to suppress such inquiry, claim to be afraid of ignorant members of the public who will react out of fear and refuse to vaccinate their children.  The attempts at suppression however give rise to an equally plausible hypothesis as suggested by Dr. Healy ...  that Offit and company are afraid of what such inquiry might show.

NOTE: As the author of this blog comment I advise that my children have received all recommended and mandatory vaccines and that I have received vaccines at different times including during the H1N1 panic two years ago. I recognize the importance of vaccines in public health and safety. I am, however, seriously concerned about the incessant attempts to suppress scientific inquiry of vaccine safety issues and the view that all possible connections between vaccines and autism spectrum disorders have been explored and "debunked" for all time.
Posted by Unknown at 10:12 am

The paper, published in November 2011 in the Journal of Inorganic Biochemistry is available here (opens in a PDF) omsj.org/reports/tomljenovic%202011.pdf

Susceptible populations mentioned by Dr. Healy intrigued me...My son's HHE response @ 2 months could have also been indicative of Tuberous Sclerosis. We still don't know whether he has it or not. Genetic testing is prohibitively expensive, and insurance doesn't cover it.

eye opening stuff. I am sharing this. Thanks

Sadly ironic that people who destroy trust continue to demand it. Coercion is no substitute for quality.

Thanks for the Great article ~

Testing a dog's serum antibody titers can prevent
overvaccinating, so I've always been curious as to why we don't do this with children and adults. Furthermore, my autistic son definately had a bad reaction to one of his vaccines, but I'm not convinced this caused his autism. It may have exacerbated his autism and that sort of haunts me. Perhaps he'd be more high functioning if he hadn't been vaccinated? I don't know. The thoughts that flow through our heads about what--in the past---caused our children's autism can hinder our path of helping them heal today. There's no doubt vaccines can cause bad reactions, that's why the federal government has a vaccine injury program. But do they cause autism in certain people who are sensitive to the ingredients? That's the question that remains to be answered. And if that is so, how would we test those who could have a bad reaction?

Anonymous...maybe we could take our children to the vet.


About my son's reaction at 2 months. Although SCIENCE tells me different, I've never totally been able to let it go that his brain swelling had nothing to do with his troubles, correlation not equaling causation and all. Let you kid take one for the good of the rest of the herd, regardless of possible sensitivity which Doctor Healy mentioned in her video.

It's too hard to look to safety for a succeptible few, and it doesn't pay like herd immunity. So, let's shove it under the rug. Survival of the fittest and all.

2012 - Columbia Unversity researche find causal connection Vaccine->Autism due to Aluminium ingredient (all vacciens have it).

"...is it unreasonable to question whether the current pediatric schedules, often containing 18 Al adjuvanted vaccines, are safe for children? ... The application of the Hill's criteria to these data indicates that the correlation between Aluminium in vaccines and Autism spectrum disorders may be causal. Because children represent a fraction of the population most at risk for complications following exposure to Al, a more rigorous evaluation of Al adjuvant safety seems warranted."

Al adjuvant not enough tested means vaccinating your kids amounts to lending their bodies to "science" for research, vaccinations are a hidden clinical study.

Let the pro-vaccines experiment with their healthy children, I'm not gonna lend them mine!

Just like thimerosal was acceptede as safe without proper safety testing, aluminum salts seem to be deemed safe without study too. Mercury, aluminum and formaldehyde all vac ingredients are endocrine disruptors. All are khown to be able to cause spontaneous genetic mutation. They are neurotoxic, genotoxic and mutogenic, but the reaction is always the same, that its onlt small amounts. But, safety testing for accumulating and multi-vaccines in one visit and other complicating factors are also ignored because they must just seem bothersome to manufacturers and proponents. No other common denominator can possibly match vaccines as the cause of the autism phenomenon. It fits, nothing else does.