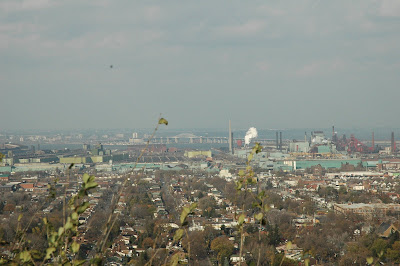 The dark smokestacks and olive green buildings on the left are part of the Stelco steel mill, the mint green ones in front of that and to the right are Dofasco. The skyway bridge (8 lanes wide!) that runs between connects east Hamilton to west Burlington over the Hamilton Habour (the western end of Lake Ontario.)
Photo and information above from skyway-ingenia, Lisa Shadforth

Genetic Mutation has been a hot topic in the autism news with several studies pointing to genetic mutations as indicating increased autism susceptibility. Genetic mutation can occur as a result of a number of different factors including chemical and radioactive insults. A story in today's Toronto Star dealing with genetic mutation in Hamilton Ontario mice really made me sit up and take notice.

While there's no evidence that residents of the area are experiencing the same genetic changes, the project's lead author says the findings do raise that question.

"We need to do that experiment and find out," said Carole Yauk, a research scientist with Health Canada.

A future study will look at "DNA damage in the sperm of people living in those areas."

Dr. Rod McInnes, director of genetics at Canadian Institutes of Health Research, said the mice could be "the canary in the coal mine" signalling the genetic risks to humans of breathing toxic air. ... While genetic changes in sperm would not affect a male directly, they'd get passed on to the offspring that receive his DNA.


The story reports on a study indicating that the mice living under the Burlington skyway downwind from 2 Hamilton steel mills and breathing the air from those mills for a period as short as 10 weeks were found to have significant sperm mutations. The study Germ-line mutations, DNA damage, and global hypermethylation in mice exposed to particulate air pollution in an urban/industrial location is published in this weeks edition of PNAS.

Why did this particular story grab MY attention? We lived on Leominster Drive, in the westerly area of Burlington adjacent to Hamilton for 12 months prior to Conor's conception and a further 9 months until he was born at the Joseph Brant Memorial Hospital in Burlington. Two years later he was diagnosed with PDD-NOS, later changed to Autism Disorder with profound developmental delays.

Enough information to jump to rash conclusions? No. Pause for thought? Yes.

autism
Posted by Unknown at 9:34 am

This is a thought that crosses the mind of all ASD parents from time to time. All the more reason to identify the cause(s) so as to spare us all the tortuous speculation. Maybe it will turn out to be an entirely natural and random mutation. Even to know that would be a relief - at least there's no cause for guilt that any action or inaction on our part could have made a difference.

I am not jumping to any conclusions. The study in question dealt simply with mutation of mice in the area and made no mention of autism. It was just startling because of the time that we lived there, the 21 months prior to Conor's birth.